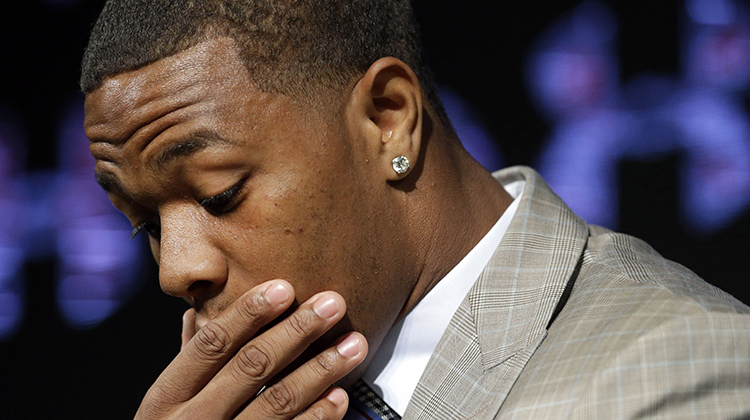 Ray Rice got a raw deal.

Just look at what happened to Ray Rice.

The video of the incident showed Rice’s girlfriend (and soon-to-be wife) hitting him twice: once before getting on the elevator and once on the elevator. Then it shows her moving aggressively toward him in what appears to be an attempt to strike him a third time. (Please note this is not a defenseless woman cowering in the corner.) Rice responds by hitting her in the face, and she hits her head on a handrail, which then knocks her out. The eventual response to this incident? Ban Ray Rice from his lucrative association with the NFL and fire him from his team, the Baltimore Ravens. These two things obviously shame him, put a big DV on his forehead, cut off his income, his prestige, and his association with his friends and teammates. A very harsh and far too stringent response, in my opinion. But wait. What would happen if we reversed the roles here?

Imagine this: Ray Rice hits his girlfriend before getting on the elevator and then again on the elevator. Then he moves aggressively toward her in what appears to be a third attempt to hit her. As he moves in to hit her, she hits him in the face and he hits his head on a handrail, knocking him out. What is the response to this? My guess is she would get accolades and be seen as a hero, a woman who successfully protected herself from an abuser. She would likely be on talk shows and be held up as a role model for all women. Rice would likely be arrested for domestic violence, while she is seen as a hero.

Do you see the problem here? For the same behavior she is a hero and he is shamed and banished.

So Ray Rice was not guilty of beating up on a completely defenseless woman. No. As we previously described, this was not some cowering woman in the corner, covering her face with her arms and hoping not to be hit; this was an aggressive woman who had already struck him twice and was moving in for the third blow. This is very different from a defenseless women. Yes, Ray needs to take responsibility for hitting her, but doesn’t she need to take responsibility for hitting him? Isn’t she clearly guilty of domestic violence? I read quite a few articles on this incident, and I simply don’t remember ever seeing her violence addressed. No one ever mentioned it. Just another example of the huge double standard we face. It is so powerful that the media simply ignores the violence of women. The YouTube video with this article shows numerous women who were violent in relationships and what was the response? Laughter and very little else.

I think the NFL really blew it on this one.

The punishment he received was far from helpful. What sort of help might he get from being banished from his profession? What sort of help might it give his wife? None. The sad fact is that the NFL acted like a cowardly white knight who was more than willing to throw Rice under the team bus in order to appear that they didn’t hate women and had über concern about the issue of domestic violence. It just seems like one big disgusting play for image by the NFL. A play that ignores the humanity of both Rice and his wife.

What happens to the man on the street who hits a woman? Is he tossed out of his job as punishment? No. Is he banned from working in his profession? Highly unlikely. Is he offered some form of counseling or educational opportunity that might help him deal with his mess? Yes, usually, and in severe cases people go to jail, but apparently the Ray Rice situation found that he was best served by this former alternative, until the NFL stepped in and amped up the ante to an extremely humiliating degree.

Does the fact that she didn’t hit as hard matter? Not really. If a 5′ 7′, 150-pound man came to me in therapy and said that he had hit a pro football player twice in an elevator and was moving toward him again to land a third blow and he got knocked out, what would I tell him? Would I tell him that he should have the pro football player arrested and that he was a victim? Or should I tell him that his behavior was a part of this equation. Duh. Why doesn’t Mrs. Rice get the same treatment? Because we are living in a gynocentric world that holds men accountable and fails to do the same for women.

If we are going to let women off and not hold them accountable for domestic violence, then we need to do the same with men. If we are truly equal, it is the only fair thing to do.